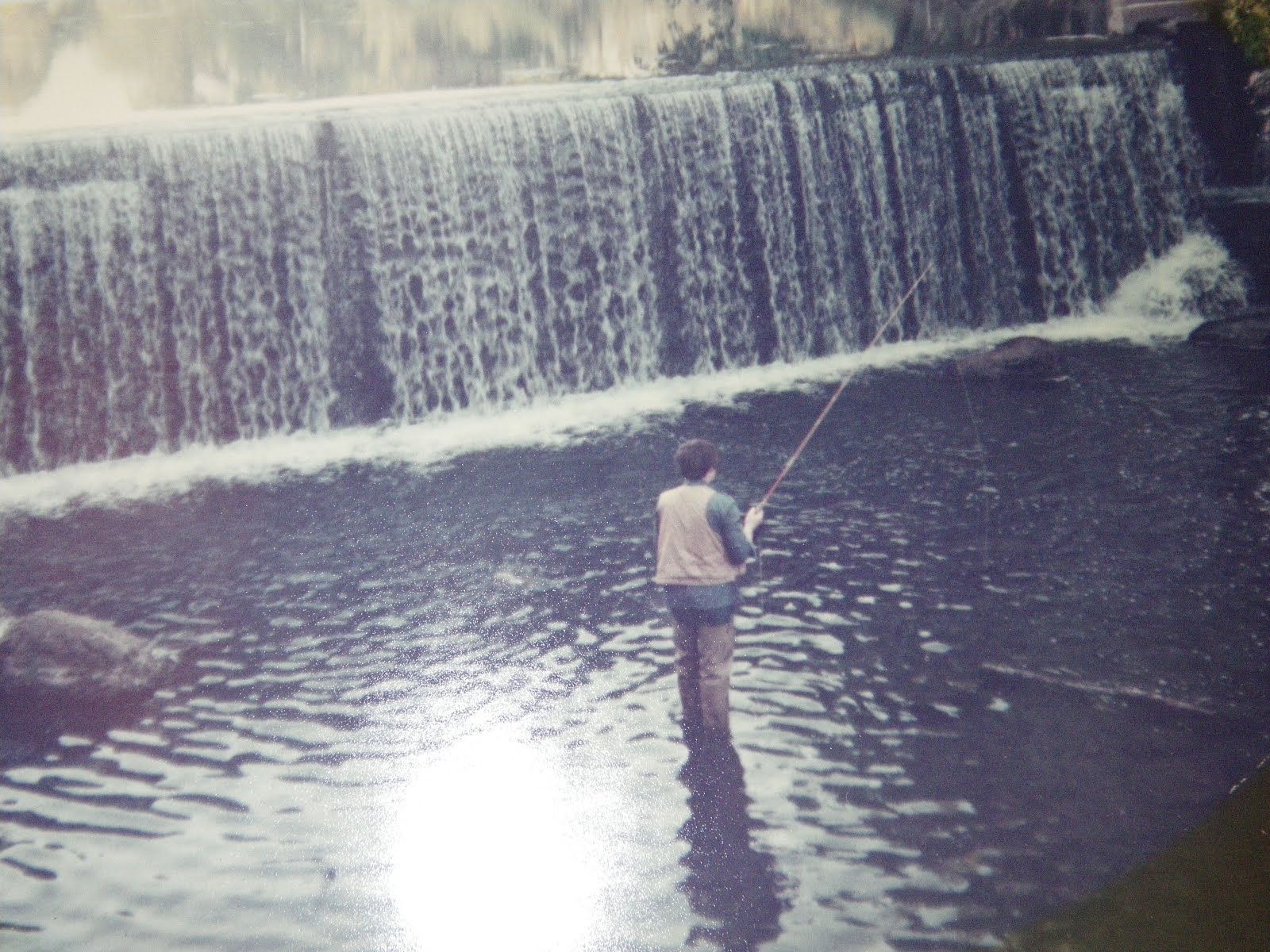 Another Opening Day 2018!! Over the years I have had many opening day traditions, from fishing the Farm River for many years with childhood friends and family, to fishing the Hamo with my son, early mornings, late mornings. At some point I graduated to fishing the Farmington River, going in the late morning with my son Matt or my brother Mike. A few years ago Matt and I joined the NYD crew on a wild brook trout stream and another tradition was born.

Today Matt and I joined Alan and Mark on a wild trout stream someplace in Connecticut. It was sunny and warm, finally. Some wild brookies and fall fish were caught, but I got to share the stream with my son and friends for a couple of hours. For this I am very thankful. The friendships and simply wetting a line together was my reward for today. 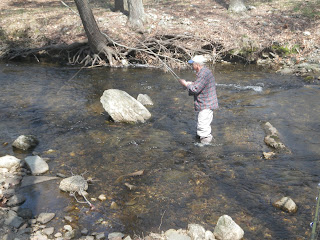 Valentines Day 2018-Finally on the board.

I was able to get out for a couple of hours today and fished a local stream. I was euro nymphing using pink worm as the anchor with  BHPTSH as the dropper. Worked a couple of deeper pools to no avail.
Finally took a nicely colored hold over rain bow in a nice deep run on the pink worm. Bow actually cartwheeled out of the water. So relief, finally on the board. Pictures to follow. Had a neighbor with me who took the pics.

Back at the Bench

Several years ago after being introduced to Euro-nymphing I was encouraged to tie my own flies. Many years ago when I was in my twenties I used to tie quite a bit mostly nymphs and streamers.
For whatever reason or reasons I stopped.  Back a few years I started to tie Euro nymphs and some soft hackles. A variety of reasons have kept my from the bench until this weekend, when I moved all my materials, vises, and  tools upstairs to a more convenient location. Now I will be back at the bench tying again, in preparation for some fall fishing. 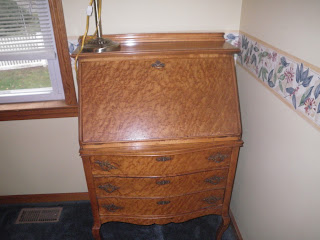 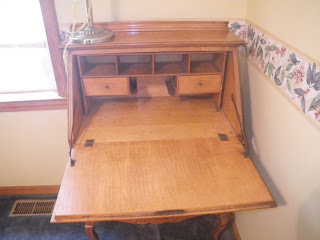 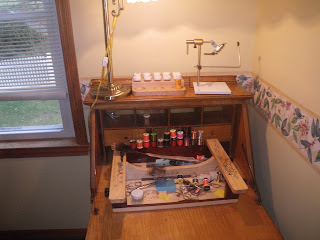 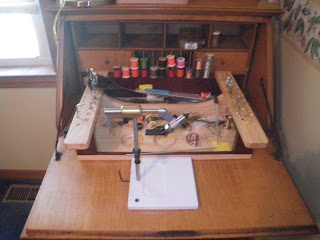 I set up the bench using a handmade, maple drop leaf desk, that was constructed by my wife's grandfather many years ago. Above before and after photos.
Posted by TROUTI at 12:37 PM 11 comments:

Sometimes you just have enjoy mother nature. This large field of sunflowers is located on my way to my home river! ENJOY the view! 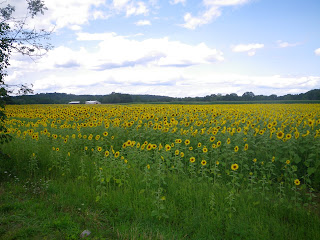 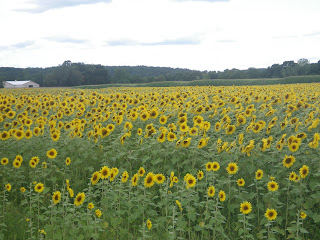 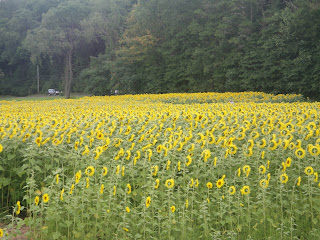 As you can see I have not been fishing or posting on a regular basis. This is an update for my fellow bloggers,close fly fishing friends and fly addicts!! You all know who you are.
As you guys know I am battling the big "C" and recently had a small setback, which has prevented me from getting out to fish. I am on the mend, slowly, getting better and hope to be out on the stream with you guys soon, So I am living vicariously through your fishing blogs which helps me to keep up my spirits and hopes.
Fly fishing has been my "drug" of choice to help escape my troubles. My wife used to tell me "Go stand in the river", which is what I did so frequently to relax, like we all do.
So keep fishing guys, posting, and I will keep reading and commenting until we can get together.
TIGHT LINES!
THANKS For the Support !!!!
TROUTI
Posted by TROUTI at 5:49 AM 11 comments:

Spent some time this afternoon exploring a small local stream. At location A, I promptly hooked and lost what would have been the first fish of the day. The fish took a sz. 18 BHPTSH, dead drifted. I set the hook, felt the tug and just quickly it was gone.
At location B nobody was home, but on the way down a dirt road spotted a young deer browsing on the fresh vegetation . He or she seemed undisturbed by my presence and I was able to get a couple of photos of the deer.
Arrived at location C, and as approached this area noticed a few fish rising pretty steadily. I tied on a sz 16 Partridge and Peacock soft hackle, cast above the first riser, the fish took it on the dead drift, and of course I missed that one. Continued in the same pool, and finally managed a small stocked rainbow, which took the soft hackle on the retrieve. Released to live another day.
Moved down stream a bit and located a few more rising, hooking and losing another one.

Getting Back on the Stream

I have been slowly getting back into the swing of things after an extended time away from the streams. Today I visited a Class 3 WTMA, that holds both stocked and wild trout. I had scouted out this particular stretch of river yesterday and had spotted several trout sipping something very small.
I was unable to see exactly what it was they were on, trying in vain using some assorted soft hackles and spiders.
Returning today, the fish were all rising in the same stretch and I began using a sz 18 PTSH, and initially landed a pretty solid rainbow that took on the retrieve.
Moving downstream a bit, located a few more sippers, and missed one on the drift. Must be a bit rusty. That will change as I get back into the swing of things!!
After sometime, changed over to a sz 18 black soft hackle, moved back to my initial spot and saw a rise directly up and across from where I stood. I made one cast above the rise, twitched the fly once and was rewarded by a hard, solid take and this fish ran downstream and under some brush. This guy gave me a good battle and soon a gorgeous 10 inch wild brown was in my hand. It was a pleasant suprise and a great ending to a short but successful outing.